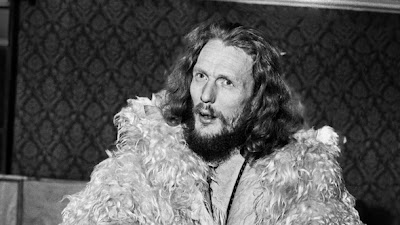 Ginger Baker is the legendary drummer behind Cream and Blind Faith who pretty much invented Prog Rock and laid the foundation for Metal. He's the drummer who went to Lagos to find the roots of African rhythm in the midst of civil war, and jammed with Fela Kuti.  He's the drummer who did battle with the jazz legend Art Blakey and earned the respect of Max Roach.  Despite this abundance of natural talent - "time" - as he would call it - his magnificent drum solos that bring jazz improvisational technique and world music rhythm to rock - you get this abiding feeling that he regards himself as a failure. That if he hadn't been such a pugnacious, damaged, dope-addled, Gonzo bastard - he might've achieved so much more.  After all, why do we only have 2 years worth of Cream recordings?  Or just a year's worth of Blind Faith?  Because other "super" musicians refused to play with him.  Genius can be harsh in its selfish drive for perfection, and just plain old mean to friends and family. And a musician raised in the culture of the Big Band - a drummer who is also an expert composer and arranger - is nothing without a group to jam with.  But maybe, this excellent documentary suggests, what made Ginger Baker such a complete self-sabotaging nutter, is what made him such an amazing drummer?

I guess we'll never know. Documentarian Jay Bulger admits he still doesn't know after living with Baker on his South African polo ranch (since repossessed - a familiar tale of financial windfalls squandered). Eric Clapton seems to admire him from a safe distance, thinking it might damage his sobriety to get to know Ginger too well.  Does Baker himself know?  He seems bitter at the royalties he didn't get for orchestrating Cream songs, and bitter at the musicians who'll no longer play with him.  But he remains an exceptionally charismatic, outrageous and brilliant character - the kind of guy who 'll break the nose of the guy who's making a documentary about him - or threaten to break a glass bottle over the head of the guy who's introducing him on stage at the London Film Festival!

You come out of this movie profoundly grateful to Jay Bulger for having the sheer balls to stick around Ginger Baker this long and to get his life story in all its complexity and grotesquery. and for having the wit to realise that the way in which Baker was treating him was an essential part of the story.  You also have to admire the technical skill with which this first time doc. is put together.  The editing is superb, the access to the industry's major figures impressive, and the use of animation by Jacob Ribicoff particularly effective. There's a sequence in which the animated Baker plays African drums to the mashed-up sound of bombs dropping on London and then drum solos from the Cream days.  This sequence says more about Baker than any number of interviews can.

BEWARE OF MR BAKER played SXSW, where it deservedly won Best Documentary, and London 2012. It does not yet have a commercial release date.  The running time is 92 minutes.
Posted by Bina007 at 17:36