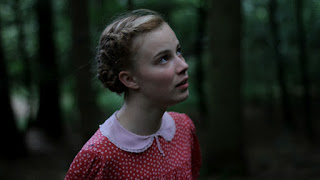 After the endless and high-pitched melodrama of LAURENCE ANYWAYS, it was like a cool drink of water to watch Australian director Cate Shortland's delicate, impressionist and impressive movie, LORE.  Based on the Booker short-listed short story by Rachel Seifferts, which is itself based on her own mother's memories of wartime Germany, the movie has an intimacy and fragility and moral delicacy that is profoundly affecting.

"Lore" is Hannelore, the teengage daughter or Nazi parents who, when they are arrested in the final days of the war, but take her four young siblings on a march from Bavaria to her grandmother's house in Hamburg.  This was a 380 mile trek in a land where the trains were not running, the roads were unsafe, food was scarce, and one had to traverse the different zone of control - American, English, French, Russian - all without the requisite papers.    It is also a world of women.  Women abandoned by the men who are fighting; women reduces to victims of rape; women whose bodies are something to barter for safe passage; women who try to maintain control over their meagre possessions and intellectual lives.  The men are either absent or represent risk.

Lore, a privileged young girl, is unprepared for such hardship, and more importantly, has to cope with all this while her indoctrinated worldview comes into question, and while she is in the midst of puberty.  Both of these two intellectual and emotional shocks are personified in a teenage boy called Thomas who joins up with the family.  He is useful - he has papers and can provide some kind of protection and street-smarts - but Lore is painfully aware that he is a Jew, and that she is attracted to him.  They speak very little, but the tension is palpable and drives the movie forward.

Cate Shortland handles this material with integrity, sensitivity and balance. Moreover, she manages to maintan the sense that this is ultimately the story of a family, and of a young girl's emotional, intellectual and sexual awakening.  The political trauma infuses everything, but never overwhelms the heart of the movie.  To that end, Shortland is aided by strong performances from her child cast, and particularly by Adam Arkapaw’s (SNOWTOWN) beautiful landscape photography and Max Richter's score.