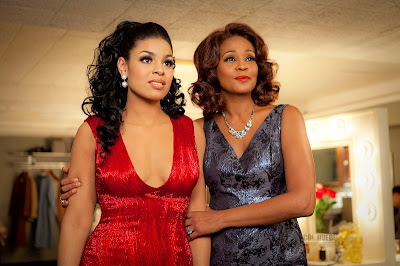 SPARKLE will be remembered as the last film Whitney Houston shot before her untimely death.  And its only redeeming feature is her care-worn, slightly bloated but forever poised and authentic presence as the religious, reformed mother of three talented daughters. At around half way through the film, Houston goes back to her roots in gospel and sings a rendition of His Eyes Are On The Sparrow that is so full of meaning and pain and power that we are transfixed.  That song is worth the price of entry alone.  And throughout the rest of the film we are ever alert at the resonances between her character, and the advice she gives her daughter Sister (Carmen Ejogo) - a beautiful talented woman who falls for an abusive, addicted man. As the mother chastises the daughter for failing to use her life as a cautionary tale, we wonder how self-aware Houston was in saying those lines.

That morbid curiosity is about as much interest as there is in this rather trite remake of the Joel Schumacher musical.  It reads as a pale echo of the critically acclaimed DREAMGIRLS, with hackneyed dialogue, banal performances and pat answers.  Set in the late 60s, the story sees three sisters form a girl group in the manner of The Supremes, playing local clubs in search of a recording contract.  The eldest sister, Sister, falls prey to a rich husband who abuses her and feeds her cocaine to the point where she ruins herself and the band .  The second sister gets an afro, gets empowered and leaves to become a doctor.  That leaves Sparkle (American Idol winner Jordin Sparks), to write her songs and get enough confidence to actually sing them for the all important record company executive.

As tales of empowerment go, it's not very convincing.  Sister has by far the most interesting story in the manner of Ike and Tina until she is rather summarily sent to the sidelines.  Dolores seems to have been born a fully formed activist and leaves the film before she can do much of anything.  And Sparkle is just about as bland as Jordin Sparks wide smile.  The only faint interest is in the treatment of Satin (Mike Epps) - a comedian who plays to white audiences.  There's still a shudder at the language he provokes and the material he uses.

SPARKLE was released earlier this year in the USA, Canada, Argentina and Italy. It opens this weekend in the UK and Ireland; on October 11th in Germany; on October 25th in Australia and New Zealand; on November 16th in Bulgaria; on November 23rd in Norway; and on November 29th in Portugal.