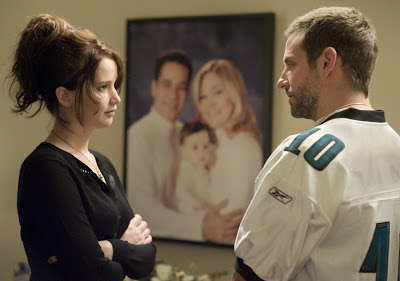 David O Russell brought arthouse integrity and quality to the underdog sports movie with THE FIGHTER, and pulls the same trick on the rom-com genre with SILVER LININGS PLAYBOOK. It's a clever, funny, superbly acted movie with a visceral, up-close and uncomfortable shooting style that almost fools you into thinking that it's a braver, more unconventional movie than it really is.  At its heart, the movie is a basic one - boy meets girl, girl loves boy, boy's too hung up on former lover to realise he loves girl, there's a dance contest, they kiss, the end. The twist is that he's bipolar and just out of a mental institution, she's a widow with massive SLAA issues, his dad's OCD  with anger management issues, and his mum's clearly an enabler. The film's plot is driven by the unhealthy quid pro quo: she'll help him contact his ex (against whom he has a restraining order) if he'll participate in a dance contest with her.

David O Russell's script (based on Matthew Quick's novel) is whip smart and crackles with energy.  Jennifer Lawrence and Bradley Cooper have real chemistry and seeing them spar is one of the joys of the film.  It's great to see her broaden her range beyond put-upon hardened teen and similarly it's great to see him move beyond pretty-boy wise-ass roles. There are mis-steps to be sure -  the age difference threw me off and I never really bought it.  The inclusion of an African American character (Chris Tucker is his most modulated and impressive performance to date) only to have him, per movie cliché  contribute to a dance scene by having the white characters "dance blacker". And that schmaltzy final declaration could've come out of a risible Richard Curtis movie.  But overall, it was fun to spend time with the main characters and feel the grunginess of working class Philadelphia through  Masanobu Takayanagi's (WARRIOR) frenetic camerawork.

SILVER LININGS PLAYBOOK played Toronto 2012 where David O Russell won the People's Choice Award for Narrative Feature. It was the surprise film at London 2012. The film will be released in the USA, UK, Russia and Iceland on November 21st. It opens in Portugal on December 6th, in Sweden on December 21st, in Germany, Norway and Turkey on January 4th, in Spain on January 11th, in France and Australia on January 31st, in New Zealand and Bulgaria on February 8th, in Argentina on February 21st, in Belgium and the Netherlands on February 27th, in Italy on March 14th and in Denmark on April 25th.
Posted by Bina007 at 23:00