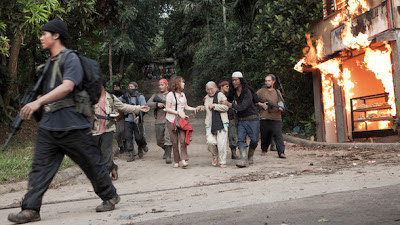 This review is brought to us by guest reviewer, JK007.

CAPTIVE has all the elements needed for an intense, thought-provoking and well informed picture but unfortunately only skims the surface. Instead what we get is a great first hour where director Briallante Mendoza outlines the story but the progression of the two hour picture is a path of nowhere.

The movie is based on the 2001-2002 Dos Palmas hostage crisis in which Islamic separatists, Abu Sayyaff Group (ASG), kidnap 20 guests from a resort in the southern Philippines which included tourists and Christian missionaries. Among them in the film is Therese, a French social worker, played by the brilliant actress Isabelle Huppert and her elderly companion Soledad. Unfortunately, due to a weak (and perhaps improvised?) script Isabelle’s ability was wasted. In addition, what was really important was the engagement of the characters so the audience could relate - again a huge let down.

The film does try to keep away from a documentary feel and thus inserts a little bit of Hollywood gun shooting, taking over of hospitals and the constant running did carry on the suspense of the film but could only take it so far.

Don’t get me wrong, Mendoza without doubt began the film full of promise with the shaky cam style of the actual capture and then the journey in a rickety boat to land. The feeling of unknowingness allowed us to follow the journey through the eyes of the captives, we too were prisoners.

It is clear through their basic interrogation of the captives that the ASG were simply in it for the ransom money but unfortunately their captors weren’t the wealthy they first assumed and so from this the captors had the only solution of appealing to governments.

Therese, the only hostage, that we ever to get to know anything about first comes to light very early on in the film when one of captors realises that on board is a box of bibles and wants to sling them off immediately. Therese, single handedly confronts the situation but is simply moved aside. This Muslim Christian divide is just one of the issues that could have interestingly been fleshed out but instead had simple mentions.

CAPTIVE then hones in on one of the best features of the film: location shooting that adds great authenticity. The ASG takes the captives through the jungle where they both have to fend off leeches, scorpions and ants to a very realistic degree.

The big difference with other films of this type is that Mendoza gives a human-side to the captors and does not make this film a simply Hollywood good vs. bad. The ASG are kind and respective to the captive, and at the same time Mendoza explores the relationship between captive and captive taker. Through the tumultuous months, barriers break down and relationships form where Therese finds herself pulling one of the younger rebels into cover when he is injured. One of the younger female hostage even flirts with one the captors and when confronted about it outright defends herself with the belief that the captors have legitimate reasons for their actions.

However, as the film progresses this civil and humane side of the ASG break down with change of leader as rape and beheading become part of the troubles and both the audience, captives and captors are waiting for their to be an eventual end!

Though, there are some gems of scenes such as one where a film crew comes in to interview the captives and we see finally are able to understand a glimmer of the captives mental state. Though any of the points that are made such as Therese questioning that if it’s easy enough for a film crew to find them what makes it so difficult for the government. These key points are washed aside due to the fact that what the audience is waiting for is any type of argument or story.

Mendoza does get across throughout the film the sense of disbelief that characterizes the violence in Mindano with scenes of fighting between militants and the army amidst the very graphic birth of a child. But, what this film unfortunately does not do is explain much more about the crisis in Mindano or even the controversial issues between terrorist groups and their motives.

Hats off to the Isabelle Huppert because it is clear she had the ability to make this film a must-see but just wasn’t given the opportunity. Instead the film lacked in many major areas such as script, character development and ultimately argument which the content had more than ample scope for. For the location, scenery and shooting itself absolutely great!

CAPTIVE played Berlin, Sydney and London 2012. It was released earlier this year in Denmark, the Philippines, France and Poland. It opens in Brazil this weekend.
Posted by Bina007 at 10:39