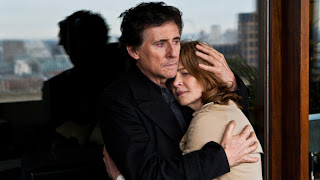 I, ANNA is a beautifully made, unnerving psychological thriller from writer-director Barnaby Southcombe.  Set in contemporary London, the movie has a style and control and slow-building tension that is utterly breathtaking.  It's one of the best films I've seen at the Festival so far, and an utter surprise!

The movie stars Charlotte Rampling as Anna, an apparently divorced woman living with her single-parent daughter, nervously entering the speed-dating scene.  She has a certain eery quality from the start.  Maybe it's her anachronistic use of phone boxes, or that we see her wandering apparently aimlessly through a  windswept Barbican at odd hours of the morning, moments after a brutal murder has been committed.  Similarly lonely, aimless and eery is Gabriel Byrne's cop. I love that he's not that clichéd hard boiled-lives-for-his-job cop of low-rent TV series.  Rather he has a melancholy, soulful air, and even when he starts stalking Anna there's something almost gentle about him.

I guess it isn't the most original plot device to find that the woman the cop is stalking turns out to be involved in the crime, but the movie deals with that quickly (within the first 30 minutes), rather than teasing us with obvious red herrings.   This is a grown-up film more worried about the psychology of an event and the emotional ramifications of a crisis, than with "whodunnit".  And the screenplay still has enough tricks up its sleeve to genuinely surprise us in the third act and build to an unbearably tense denouement.

The two lead performances are convincing and compelling, particularly Gabriel Byrne in, perhaps, a softer and more ambiguous role than we've seen in some time.  It was also a pleasure to see Eddie Marsan play a straightforward jovial decent cop rather than the rather shifty characters he normally gets landed with.  Behind the camera, particular praise has to go to Ben Smithard whose cinematography beautifully recasts banal urban architecture into unreal, empty backdrops echoing the protagonists interior moods. The smooth, modern, hard-lit surfaces created a feeling of alienation that was perfectly complemented by K.I.D's electronic score.

Overall, I, ANNA is a sophisticated, compelling modern noir thriller with enough nods to the history of the  genre to satisfy cinephiles and one genuinely superb plot twist to give us something new to be dazzled by.  This has to be a strong contender for the Festival's First Feature prize,  and I hope that it gets the audience it deserves.

I, ANNA played Berlin, Sydney and London 2012.  It was released in Sweden earlier this year and is released in the UK on December 7th. It will be released in Germany on April 18th 2013. The running time is 93 minutes.
Posted by Bina007 at 11:30