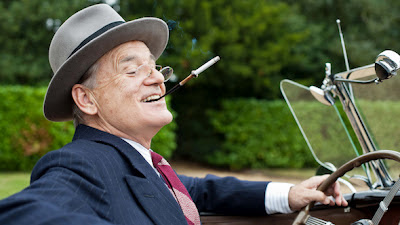 HYDE PARK ON HUDSON is a great disappointment. Despite the great cast and historically fascinating personalities, the resulting movie is flabby, unfocused, and frustrating.

The set-up is that Britain is on the verge of war with Hitler, and desperately needs a reluctant USA to commit to support her. King George VI and Queen Elizabeth (of THE KING'S SPEECH FAME) are thus dispatched to the USA to woo the crowds and confer with President Roosevelt at his mother's upstate New York country house, Hyde Park on Hudson.  The President is evidently charmed by the King, and the King is happy to receive encouragement from a father figure when his own father was so cold - the basis for the oft-ridiculed "special relationship".  This important historical event is fascinating and could have been the source of a profound character study of two men, akin to FROST/NIXON. Bill Murray is mischievous and gregarious as FDR, a pleasant change from his more melancholy Wes Anderson roles, and Samuel West is a nonpareil actor who creates a warmer, less angry version of the King from Colin Firth's portrayal.

The problem is that this potentially captivating story is wrapped up in the altogether banal story of one of FDR's many mistresses - a distant cousin called Daisy who doted upon FDR and is shocked to discover that she is far from his only lover.  I'm not sure how old the real Daisy was at the time of this meeting, but Laura Linney (much as I admire her) is simply too old to play the simpering ingenue, and is also saddled with a very ill-written unsympathetic role. The movie lost pace and focus every time her dull voiceover hoved into earshot, and I was just screaming to get back the Murray-West show.

What else is there to like and dislike? Olivia Williams is absolutely superb as Eleanor Roosevelt - I haven't seen such a mocking curtsey since Helen McCrory played Cherie Blair in THE QUEEN.  I also admire Olivia Colman tremendously but I felt she was miscast as Queen Elizabeth - somehow she just didn't have an air of majesty and the requisite superciliousness.  One can't help but feel that Helena Bonham Carter's well-meaning but hierarchy conscious Queen was closer to the truth of the matter.