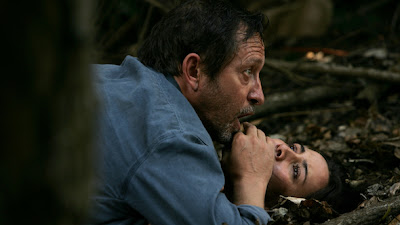 Everything wrong with South African thriller SLEEPER'S WAKE can be summed up in the word "baboon".  It's the kind of movie that has a half decent idea at its centre and some decent enough performances, but as two crucial junctures, mishandles the tone so that we laugh at it and the tension is broken.  As a result, despite its good intentions and genuine sense of unease and menace in its first hour, it has to be judged a failure.

The  movie is brought to us as the debut feature of writer-director Barry Berk.  The protagonist, Lionel (John Wraith), is a grieving middle-aged widower mourning in a deserted "cabin in the woods". As is the way with this genre of film he meets an eery family - religious domineering father, sexually precocious daughter and disengaged son.  Int the first hour of the film, Lionel is repeatedly put in  a position where a woman is making him uncomfortable and his genuine gestures of goodwill lead to sinister results.  So far so good. The problem is that as the tension ratchets up the movie enters its final half hour, it tries to go Straw Dogs but ends up in a place of absurdity, from which it cannot recover.