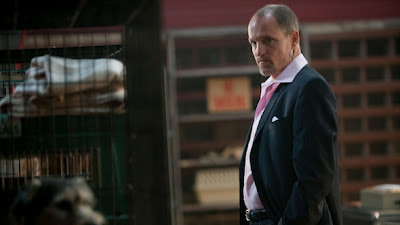 SEVEN PSYCHOPATHS is the title of a screenplay that lovably drunk Irish screenwriter Martin (Colin Farrell) is struggling with.  He reluctantly accepts the help of his gonzo actor buddy Billy (Sam Rockwell) who as it happens is both shagging the girlfriend of, and has kidnapped the dog of, the local mobster Charlie (Woody Harrelson).   Billy's in cahoots with Christopher Walken's ageing conman, too, adding to the generally whacky cast of characters both in the world of the movie and the second-order fictional world of the film that Martin is writing.

The problem with Martin McDonagh's follow-up to his wildly successful black, bleak comedy IN BRUGES, is that while it retains that movies quick wit it singularly fails to recreate its narrative drive and compelling central emotional pull.  This may well be because McDonagh chooses to abandon the simpler linear thriller structure of IN BRUGES for an altogether more clever, knowing, movie-within-a-movie satire on Hollywood shootemups.  The result is a movie that is often very funny, consistently smart, but ultimately frustrating - altogether less than the sum of its parts.

SEVEN PSYCHOPATHS also contains its own critique - a movie whose best line is its title, whose best scene is its stylish Tarantino-esque opening - a movie that admits its female characters are ill-drawn and some of its characters' motivations ill-defined.  What is left, then, for the critic to say? Here's what.  A movie that plays with its own structure and grammar has to be, (viz. Charlie Kauffman) very tightly written indeed. It has to be so neatly constructed that the audience watching it subsconsciously allows the director to play with them, feeling secure that he knows what he's doing.  In other words, for a movie about a screenwriter meandering aimlessly in search of a plot to itself be meandering aimlessly in search of a plot, is ultimately a weak joke. Sure, as Christopher Walken's character puts it, "it's got layers".  But if we don't care about the characters, feel no sense of peril, and become bored of the joke, what's the point?

That said, there's a lot to pass the time with in this movie. Individual pieces of dialogue or visual gags that are inspired.  Having a character refer to "Hans" in a cemetery and then show a grave with the name "Gruber" on it is genuinely funny.  I also like putting Colin Farrell and Sam Rockwell on screen together as the two buddies at the centre of the film. It's a kind of cosmic joke to have two actors who rose to fame and then fizzled out on the back of poor script choices and outlandish personal behaviour.  I also like that forces Farrell into the "straight man" role against Rockwell plays to type.  In smaller roles, Woody Harrelson is, of course, good value, and there's some cheap but still enjoyable stunt casting in the form of Tom Waits and Dean Stockwell.