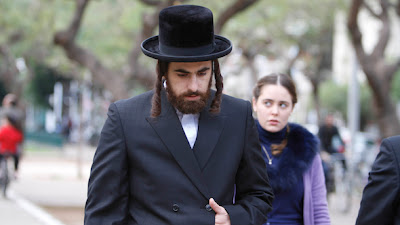 The reason why I watch so many movies is that very very occasionally you come across a movie that is so profoundly brilliant that it fundamentally alters your opinion of what can be done with cinema, and has an impact on your own life.  Maybe it happens once very couple of years, or, for me, once every 60 movies or so.  But when it happens, it's so exciting, and so exhilarating you just want to tell the world, right after you've gone back into the cinema and watched your beloved film again!  In recent years at the London Film Festival I've had that experience with Paolo Sorrentino's IL DIVO, Andrew Dominik's THE ASSASSINATION OF JESSE JAMES BY THE COWARD ROBERT FORD, and now Rama Burshtein's FILL THE VOID.

Burshtein's is an Orthodox Jewish director who's background is in making movies for the women of that community.  This movie aims at a larger audience but you can see that background in the intimacy and authenticity of the society that it portrays and especially the choices, rivalries, motives and emotions of the women. It's a movie of constricted spaces and limited options - of great societal pressures, none moreso than those one imposes upon oneself. It's a movie about emotions that are deeply felt, shifting, and repressed - where those  emotions are expressed in attenuated form - a shy smile, an unconscious melody played on an accordion, or a drunken provocation.

The central character of the film is a sweet, dutiful 18 year old girl called Shira (Hadas Yaron), presented to us as almost angelic in her white fluffy jumpers and calm gaze. As the movie opens her beautiful, elegant older sister Esther (Renana Raz) dies giving birth to her son Mordecay, leaving her husband Yohai (Yiftach Klein) a widower, under social pressure to remarry. In this society, where social relations are heavily proscribed and managed by the family and community, everyone is under pressure.  Yohai really loved his wife, but is told to remarry, with an offer from a widow in Belgium the preferred option.  This would break Esther's mother's heart as the baby would be so far away, so she pressure Yohai and Shira into a match.  Shira is initially reluctant  having a romantic ideal about the match that has already been made for her.  She agrees to consider the match with h Yohai as an act of duty.

And here the movie gets into very emotionally murky, nuanced and fascinating ground.  For it seems that Yohai, once he considers Shira as more than just a "little sister" realises that  she is beautiful and attractive. He even says so.  But Shira, maybe because of guilt at being attracted to her dead sister's husband, becomes even more introverted, hiding behind banal utterances about duty, much to the frustration of Yohai, her father and her rabbi.  Even in the final reel, when choices have been made, we are never quite sure of her attitude to the ramifications.  She remains somehow enigmatic and unknowable - almost trapped in the corner of a room, and yet there by her own volition.

This movie has so much to offer us.  As a social document it gives us insight into a society few of us can experience.  (Indeed, for me it showed me what it must have been like for my own aunt, who was asked to marry her dead sister's husband and take care of her children in another arranged marriage...) Perhaps more importantly it overturns what might be preconceptions about that society.  The women are elegant and chic - especially Esther and her aunt, over-turning Western prejudice against strict dress codes and covered heads.  Shira is put under pressure by her mother, and indeed herself, but her father is always explicit that she can make up her own mind, and her Rabbi begs her to say something real.  So how far can we assume that she is suppressed by this traditional society?  More fundamentally, we are shown a relationship between an older man and a young girl. But who has the power?  Is it Shira, cowering in the corner? Maybe not. And yet she is the one who controls the emotional tenor of the movie.

I could talk for hours about different responses I had to each scene, and the range of emotion I saw in front of me. This movie is emotionally affecting and provocative - the perfect combination.  I feel it's the kind of movie that would repay repeated viewings, and I can only agree with the plaudits Hadas Yaron has received, adding only that Yiftach Klein also gives a desperately touching performance.  Let's just hope this movie gets the distribution it deserves and I get my chance.


FILL THE VOID played Venice 2012, where Hadas Yaron won the Volpi Cup for Best Actress, and writer-director Rama Burshtein won the SIGNIS Award - Honorable Mention. The movie also played Jerusalem, New York and London 2012. It does not yet have a commercial release date. The running time is 90 minutes.
Posted by Bina007 at 18:00