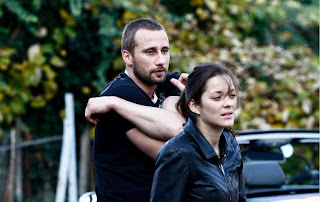 So, it turns out that in contrast to the rather earnest, Oscar-bait advertising, RUST AND BONE is basically a French art-house mash-up of THE UNTOUCHABLES and FRIENDS WITH BENEFITS.  It  has its moments of superbly acted high emotion, to be sure, but it's also very funny, and rather predictably plotted in the spirit of the romantic-comedy genre.  What that means is that you have two attractive but blighted people who fall in love with each long before they realise and admit it, but come together in the final reel after a crisis forces them to confront their feelings.  In this case, the two protagonists are Stephanie (Marion Cotillard) and Ali (Matthias Schoenaerts).   Stephanie, a whale trainer at a marine park, loses her legs in a deftly handled accident, prompting her to call on Ali, a loutish bodyguard and bareknuckle fighter who has a straightforward attitude to sex and a nonchalant attitude to parenting his young son.  His no-nonsense approach is refreshing and he brings Stephanie out of her shell, and they become friends with benefits, until the obligatory third act crisis cements their relationship.

I'm not really sure why this film has received such critical attention.  It is well acted and beautifully shot, to be sure, but there is nothing so miraculous here, unless one persists in thinking any actor who takes on a disability is worthy of praise - a patronising attitude, to be sure. Maybe it's the fact that the writer-director, Jacques Audiard impressed us all so very much with his previous feature UN PROPHET that we have a predisposition to look at everything he does through the halo of arthouse genius.  I'm not trying to sound mealy-mouthed here, but there's nothing wrong with making a superior romantic-dramedy, which is basically what RUST AND BONE is.  And for what it's worth, I really do think THE UNTOUCHABLES is the better film, and the the French academy was right to make that, rather than this, its official submission for the Oscars.

RUST & BONE played Cannes, Toronto and London 2012. It was released earlier this year in France, Belgium. the Netherlands and Italy. It is currently on release in Portugal and Switzerland. It opens in the UK on November 2nd, in the USA on November 16th, in Greece on November 22nd, in Germany on January 10th 2013, in Norway on January 11th and in Denmark on March 14th.