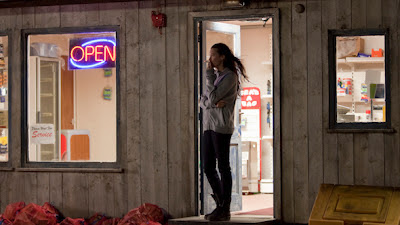 Writer-director Scott Graham's impressive debut feature SHELL is an exercise in formal control and austere, bold film-making that reminds me of Dogme films. It has an intensity and power and slow building tension that combine to make a captivating and provocative watch.  Chloe Pirrie stars as 17 year old Shell, living with her father (Joseph Mawle) in a dilapidated petrol station in the remote Scottish Highlands.  Home-schooled, without a mother, living with an introverted man, friends only with a couple of regulars, Shell is tragically left alone with her thoughts and pubescent desires.  All of the meagre relationships she has cross boundaries - the limited choices and loneliness of those she encounters put her in a vulnerable position.  The result is a character study that is so intense it almost becomes unbearable. My only criticism of the film is that it might have ended without its final scene, leaving more to be implied.

SHELL does not yet have a commercial release date. The running time is 90 minutes.
Posted by Bina007 at 21:00