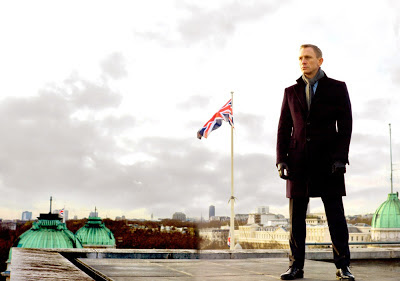 Despite my pseudonym, I am not in fact a great fan of Bond - rather I named myself after my friend Caspar who famously crashed his car pulling out of Frankfurt airport when distracted by an Aston Martin, and was forever after known as Caespi007.  For me, Bond was a pathetic fantasy denying Britain's post-Suez decline.  A man more in the tradition of Flashman - slick surfaces, sport fucking and sado-masochism.  The movies were, in general, even more ridiculous, with their wonkish gadgetry and porn-name Bond girls.  Some were entertaining in an ironic way, but let's face it, as spy thrillers go, this was a long long way below the standard set by John Le Carre's Smiley. Smiley lived in a world of decay, corruption, failure and bureaucratic incompetence. There was a sense of honour and of love, but it was struggling to survive.

Of the recent Bonds, CASINO ROYALE was a superior reboot but only because it was trying to be a Bourne film.  Moreover, the dumbing down of the Aston Martin to a Ford, and baccarat to poker, struck me as anti-Fleming, insofar as one cared at all about the heritage of Kiss Kiss Bang Bang.  We all know that QUANTUM OF SAUSAGE (HT @djeremybolton) was impenetrable, dull nonsense, and undid much of the goodwill that CASINO had rebuilt.  What then could we expect of SKYFALL, helmed by Sam Mendes, a wunderkind British theatre director of middling reputation as a cinema director, starting with the acclaimed AMERICAN BEAUTY and sliding into obscurity ever since?

The early signs were good - a cast list full of English thespians of the highest calibre - Ben Whishaw, Rory Kinnear, Ralph Fiennes, Albert Finney.  A script from Neal Purvis and Robert Wade (CASINO ROYALE) and John Logan (RANGO) that was going to tackle head-on the incompatibility of kiss kiss bang bang Bond with the age of Bourne.  And photography from perhaps the best DP working today: Roger Deakins.  All was shaping up for a Bond that was in tune with London 2012 and the Diamond Jubilee - a country presided over by an implacable matriarch, learning to be proud of its imperial heritage without making the mistake of being shackled to it, looking to a very different future with some slight degree of confidence.

The result is a movie that is perhaps the most thoughtful and reflective of the Bond series.  A movie that can look upon its heritage with fond humour but safely put it aside.  A movie that is conservative - passionately making the case for on the ground espionage; for men with the experience to tell them when to, and when not to, fire the bullet; for leaders with the balls to take the tough calls but also with the good sense to know they are accountable. It's the kind of movie, in short, where Bond can do his job with just a gun and a radio, but ultimately also uses the rockets in his Aston Martin DB5, and doesn't feel the need to apologise for either. It's the movie in which a joke can be made about the ejector seat, but in which ultimately we are rather pleased to see order restored - M, Moneypenny, Q and Bond, in a tastefully old-fashioned leather padded room.   This was a Bond I could get on board with.

In fact, SKYFALL may well be the Bond I've seen. It had wry humour; real emotional development; perhaps the most sleazy, scary villain in the canon; precious little cheap sex; and real consequences to actions. It felt plausible in a way so little Bond feels plausible.  The acting was superb. And the cinematography deserves an Oscar. I had a thoroughly good time - laughed, cheered, was moved, was scared.  It was the complete entertainment experience. 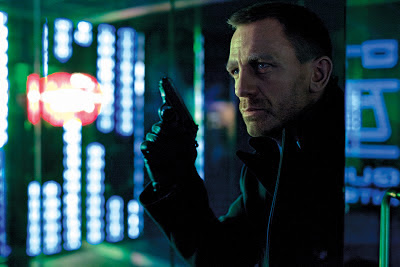 The plot has reflection and consequences and sheer heft built into it from the start.  In the precredits sequence, as Bond (Daniel Craig) chases down a man with a MacGuffin, we see M (Dame Judi Dench) take two brutally hard but necessary decisions, resulting in Bond's apparent death. He goes off on a drinking binge post-credits only to emerge when a terrorist attack on MI6 turns into a very personal attack on M. It appears that a rogue former agent (Javier Bardem) seeks vengeance on M precisely for taking those brutal decisions that put the country before the agent.  Bond is broken, unfit and old; M's "fitness for purpose" questioned by her political superior, Mallory (Ralph Fiennes); and even Q (Ben Whishaw) mocks the idea of exploding pens and the necessity of on the ground fieldwork when the world's battles are now fought with computers.

Through all this M is our unwavering moral compass. She never questions that her decisions were right, but also fully acknowledges their human cost.  Bond is, through her faith in him, reconstituted from broken man to polished active agent, able to acknowledge that the world has changed, that the new Q is valuable, and to see his own worth within the modern machine.  Mallory is a good example of just how well-thought act the script is - that a minor character with only a handful of scenes can challenge our prejudice about him every time we meet him.  Ralph Fiennes is superbly slippery in the role.  The screenwriters do a similarly superb job with Bond girl Eve (Naomie Harris) who begins as an irritating incompetent, and raises our suspicions of typical Bond misogyny, until we realise that it's all part of her character development.  Ben Whishaw is, as always, a scene-stealer as geek hacker Q. And as for the villain, Javier Bardem has created a character as outlandish as Scaramanga, or Anton Chigurh, or Hannibal Lecter - all of which this movie consciously references.  In a tour-de-force piece of CGI work we see just how damaged he is.  He is at once the most pantomime villain of the series - but also the most scary, sleazy and unnerving.  He is the Bond villain that surpasses all others - just as Heath Ledger's Joker redefined Batman villains.

Behind the camera, Adele provides the strongest theme song in years, with Paul Epworth's orchestration echoing, but never quite pastiching the old Shirley Bassey numbers.  Daniel Kleinman's opening credits sequence is also one of the most memorable of the recent Bond outings.  But most of all the superior quality of this film is down to DP Roger Deakins, long-time collaborator with the Coen Brothers.  You can see this most of all in the Shanghai, Macau and Scottish sequences.  In Shanghai, he captures that exciting neon brightness of the modern metropolis - every glass surface reflects luminous advertising - the city has the unreal air of Newton Thomas Sigel's LA in DRIVE.  In Macau, Deakins has Bond arrive at a casino against a backdrop of darkness surrounded by soft orange lanterns that takes one's breath away.  And in Scotland, we see Bond silhouetted against burnt orange night sky that reminded me of some of the most arresting visuals from Robert Elswit's THERE WILL BE BLOOD.

Is everything perfect? No.  Naomie Harris and Daniel Craig do not have enough sexual chemistry to carry off the shaving scene. And the Scottish scene starts off a little A-Team.  But these are all minor quibbles in what is an incredibly beautiful, superbly written and acted film that lifts the standard of the Bond series and puts it on a much more sustainable footing. Kudos to all involved.