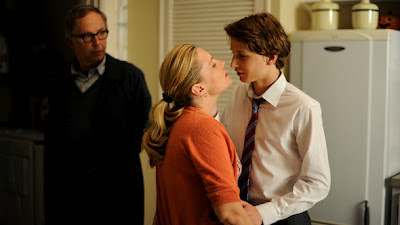 DANS LA MAISON is a slippery, subversive, wonderfully dry film from writer-director Francois Ozon.  After the high camp of POTICHE he creates a movie that is all about formal control, sly black humour and uncomfortably inappropriate behaviour.  Fabrice Luchini stars as M.Germain, a high school teacher contemptuous of his pupils imbecility and drawn to the one boy, Claude (Ernst Umhauer) who shows a whisper of talent.  M. Germain tells himself that he is nurturing a future writer, but really he's egging Claude on out of prurient interest - fascinating by the boys voyeuristic essays about how he has insinuated himself into the household of his classmate Raphael, and formed a crush on Raphael's bored bourgeoise housewife (Emmanuelle Seigner).  The teacher-pupil relationship starts as silly but as M. and Mme Germain and we, the audience, become more involved in Claude's fiction, and less able to draw the boundary between what is actually happening, and what he is fantasising about.  Is this boy just precocious, lonely and trying to escape his sad home life, or is he genuinely sinister?  Does he deserve our pity, or should we be wary of him? Is he playing with us?  Eric Altmeyer's performance is so nuanced we'll never quite know.  The journey into ambiguity is, however, great fun, and for much of the film we share Ozon's satire on the banality of middle-class life, and the absurd pretentiousness of modern art.  However, in the final scene, the tables are turned.  Is Ozon warning us, the avid cinemagoers, of becoming too obsessed with cinema?  Is he mocking us, or sharing our obsession?  Either way, this is a movie that make us laugh but also provokes and subverts. Superb!

IN THE HOUSE  played Toronto, where it wont the FIPRESCI prize, and London 2012 and is currently on release in Belgium, France, the Netherlands and Russia. It opens in Germany on Nov 29 and in the UK on March 29th 2013. The running time is 105 minutes.
Posted by Bina007 at 16:45