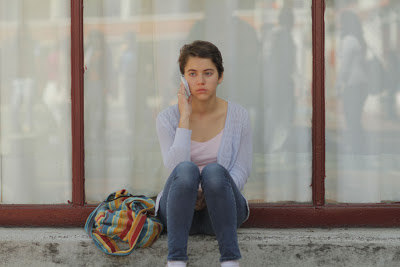 Mexican writer-director Michel Franco's AFTER LUCIA is a grim, unrelenting movie about a teenage girl victimised by her classmates after an ill-advised, drunken and, crucially, video'd sexual encounter.  At first the abuse it typical cruel teenage boy harassment.  But it steps up a level when the girls become jealous of her.  Early on, there is an opportunity for her to tell her teachers and father WHY she is acting up. Perhaps because she wishes to protect her grieving father from further pain, or just from sheer shame, she keeps quiet. This is a fatal decision that leads to further introversion, abuse and ultimately catastrophic consequences for all involved.

AFTER LUCIA is at its most affecting when it shows how a father and daughter - once so casually intimate - become distanced from each other as they struggle to cope with their grief and (in her case) extreme bullying. This deterioration of communication was all the more tragic because the director so brilliantly depicted the former closeness.  On a personal note, I am very close to my father and it's just a relationship you rarely see on screen.

At first I found the level of abuse Alejandra takes hard to believe.  I just couldn't believe that schoolkids would be so savage and, indeed, that Alejandra's teachers, if not father, would notice. At its most brutal, the film reminded me of Larry Clark's KIDS.   But the director is always careful to show how she covers up, and also how the kids are cognisant of when and what they can get away with.  And Tessa Ia is so convincing in her portrayal of  girl who just goes inside of herself, that I went with it.  It was then, a shame that in the final reel the movie took a turn that I really did not believe, cheapening the overall effect of the film.

Still, even with that incredible turn of events  AFTER LUCIA remains one of the most disturbing and best of the films at this year's Festival.

AFTER LUCIA played Cannes, where it won the Un Certain Regard Award, and London 2012. It is currently on release in France, Russia and Mexico.